Batman and Robin must settle binary and PC matters before going out and fighting crime. 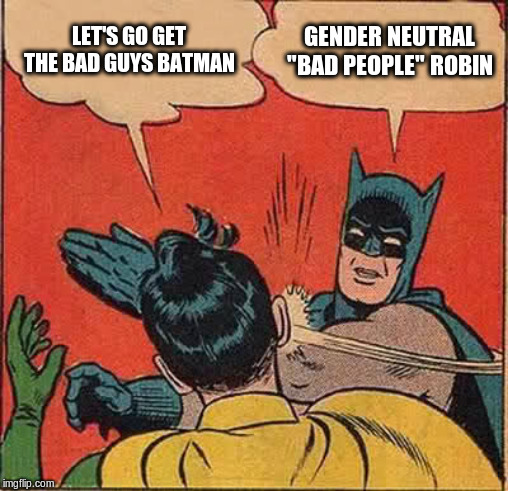 With Climate Change Derangement Syndrome (CCDS) in full effect it is funny how the mainstream media has gone all out to portray the crisis with religious fervor.  The latest example is NBC News  Climate Confessions website:

This is a perfect example of who the CCDS people treat Climate change as religion.  There are and have been varying divisive issues we have had in this country but Climate Change is special.  We have never required dogmatic belief in an unproven belief like we do with Climate Change.

The current modus operandi of the left is to state that man-made Climate Change is settled science and you have to be a knuckle-dragging dope to believe otherwise.   The problem with this tactic is this is it is more analogous to religion than science.  If you ask the average person at a climate change rally their belief about Climate Change is far greater than their understanding.

What should be obvious is that most the passionate Climate Change advocates  are like religious leaders and their followers are like the flock.  Some of the flock are very passionate but most are passionate only when a group-think frenzy breaks out (campus rallies, earth day, mass protests, etc.).  The least passionate will forget about Climate Change when separated from  group-think and go back to the iPhones, driving for pleasure, air conditioning, cheeseburgers and mass consumerism.

What is most disturbing is the Climate Change scientists who are leading this hysteria.  I concede without hesitation that these scientists are far more knowledgeable in the field than I.  My problem is that some are pitching their theories and projections that are more likely to come than not based on their inaccuracies in decades past.   I also do not like the fact that the settled science Climate Change scientists do not seem to accept counter-theories from respected scientists with opposing views.

I’m always suspicious of somebody in any field who says they have all the answers or can accurately predict future events with a level of certainty.  If we were to have listened to the experts throughout the past the was flat, was the center of the known world, and the sun revolved around the earth.  Okay, that was way back in the old days, we pretty much get things right today don’t we?  Nope, it was only in 1999 that we figured out that the universe was not only moving and expanding but doing so rapidly. Perhaps this read might be of interest:

Google has made a great leap forward and has achieved “Quantum Supremacy” with a 53-qubit quantum computer.  According to techopedia Quantum Computing is:

Quantum computing is an as-of-yet theoretical computing model that uses a very different form of data handling to perform calculations. The emergence of quantum computing is based on a new kind of data unit that could be called non-binary, as it has more than two possible values.

If you are unsuspicious of Google attaining “Quantum Supremacy” and think this is a great thing for everyone please read this article:

Rather, if you think that one of the worlds largest info tech companies and aggregators of our information has made a quantum leap in computing power might be troubling, perhaps you ought to read this:

Transparency is part of our DNA at Twitter. Today, we’re updating our archive of state-backed information operations we’ve removed from our service. Read our latest blog here: https://t.co/YeCLedMGxH